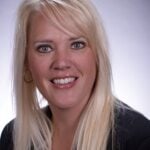 Lena Moeller was born in Scottsbluff, Nebraska and raised on a ranch outside of Torrington, Wyoming. Her father was a rancher in Southeast Wyoming before attending law school to support the family ranch later in life.  Her mother was a lab technician at the local hospital before she also attended college later in life to become an accountant.  After watching her parents both become professionals through the University of Wyoming, Lena attended the University of Wyoming, graduating with a B.A. in Political Science and a B.A. in Criminal Justice. She graduated from the Wyoming College of Law in 2004.

Lena joined White & Steele in 2004 and became a shareholder in 2010. She has focused her practice primarily in the area of defending dental and medical malpractice cases. Lena has represented numerous hospitals, physicians, dentists, nurses, nurse practitioners, pharmacists, and physical therapists in civil litigation, claims to the Medical Review Panel, regulatory matters and board actions before the State of Wyoming Board of Medicine and Board of Nursing. She has also assisted healthcare facilities in analyzing and assisting in their risk management programs.

Lena is licensed in both Colorado and Wyoming. Her husband of fifteen years, graduated from the University of Colorado School of Dentistry and the orthodontic residency program. She is also very busy with her beautiful nine year old daughter and very active three year old son. Lena continues to enjoy representing healthcare providers across the State of Wyoming.